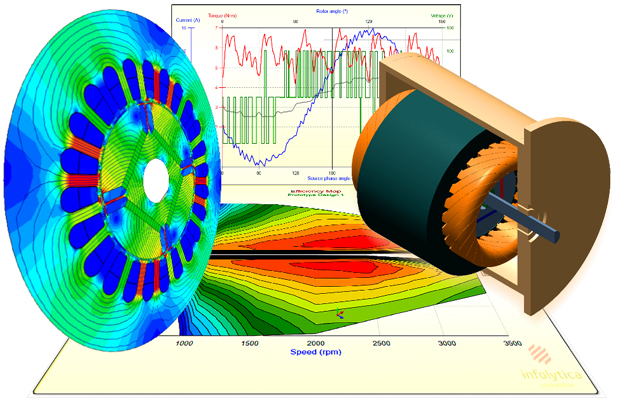 Design choices, manufacturing processes, machine faults and the effects of aging are all important factors that affect the performance, the structural integrity and the noise, vibration, harshness (NVH) levels of electric machines. For example, shrink fitting of permanent magnets may modify the magnetic properties of soft irons in motors and actuators. The presence of mechanical eccentricities or bearing degradation may introduce unwanted harmonics in the air gap magnetic flux leading to elevated noise and vibrations, or worse, structural resonance. The stress levels at the interface of thin webs in synchronous reluctance machines are critical for ensuring their structural integrity. To assess the impact of each of these conditions the forces on the surface or the interface between bodies that constitute an electric motor, a transformer or any other electromagnetic (EM) device are needed.

These are but a few examples of the importance of being able to assess the force distribution in EM devices. In computational electromagnetics, typically, Maxwell stress tensors are used to calculate the force on a body adjacent to air. At the interface between solid bodies the situation is more complex and requires additional considerations. In Simcenter MAGNET and Motorsolve 2019.1, a new field, so-called the “surface force density” field has been introduced to be able to calculate the forces between adjacent solid components.

Combined with “surface nodal forces”, these two entities provide a set of ideal tools for assessing the susceptibility of any interface to excessive stress, and for calculating the NVH levels of electric machines, respectively. The NVH characteristics are usually calculated using a structural analysis software such as Simcenter NASTRAN by importing the surface nodal forces from Simcenter MAGNET and/or Motorsolve 2019.1 in the form of UNV files.

In Figures 1 and 2, an application of these two entities are shown. Figure 1 shows the model of a NISSAN LEAF type internal permanent magnet motor, created in Simcenter MAGNET 2019.1. A series of plots show the two fields. In Figure 2, the workflow for combining the analysis results with Simcenter NASTRAN structural analysis package is shown.

Some important consequences of these tools are the additional capabilities they provide for simulating some highly challenging simulation scenarios. For example, when coupled with Simcenter MAGNET 2019.1’s 6-DOF electromechanical dynamical simulation capability, the effects of bearing degradation on machine performance and machine NVH levels can be assessed more accurately. Another important added value comes from the recently added hysteresis modeling solver for magnetic materials in Simcenter MAGNET. Forces calculated from the field outputs of the hysteresis solver adds another layer of accuracy for assessing machine performance.

In general, when complemented with existing capabilities the surface force density field and the surface nodal forces provide two important additional tools for improved assessments of stress and NVH levels in electric machines.

Figure 2: The complete workflow for NVH analysis between Simcenter MAGNET or Motorsolve 2019.1 with Simcenter NASTRAN for assessing the NVH characteristics of electromagnetic devices.